Skip Carney grew up in Statesville, NC, as the oldest of five children. His dad was a popular radio announcer and TV host and, later, a Nationwide Insurance agent. He encouraged Skip and his siblings to “make yourself useful.” Mom was busy raising and guiding five children. Her philosophy was “can’t never could do nothing.” Profound, if not grammatically correct. Growing up with this foundation, Skip entered broadcasting in high school and worked his way to a degree in Radio, TV & Motion Pictures at the University of North Carolina. Radio took him to Charlotte, then Wilson, and finally Rocky Mount, North Carolina, where he decided to put down roots and start his business. Rocky Mount has been home ever since. He is married to Karen and they have three daughters … Jessica, Kathryn and Spencer Grace … and four grandchildren.

Whether you are looking for a keynote address on Marketing Innovation or a half day workshop, Skip Carney will entertain, inform, and inspire your team with his Marketing Innovation message and ReVision™ process. Mr. Carney teaches companies how to make their committees creative, productive, and focused while being more strategic and innovative. The topic is as appropriate for Fortune 500 companies as it is start-ups and small businesses bootstrapping their way to the next level.

Skip Carney is President and CSO (Chief Sunshine Officer) of Carney & Company, The Marketing Innovation Agency. His company serves national and regional companies with the future-changing ReVision™ process. Carney & Company has been a member of the C12 Group since January 2012 and has been a key speaker at the C12 National Leaders Conference in Nashville, Tennessee. Skip is past president of the Marketing Communications Agency Network (MCAN) and is a recipient of the prestigious Silver Medal Award established by the American Advertising Federation.

I have worked with a lot of agencies from New York, Chicago, Charlotte, Richmond, and Washington,DC and I have never been this satisfied, if not blown away, by the creative aspects of the work as well as the spot on fit with our vision. It’s exciting!

I’ve always found Skip to be great at assessing and analyzing the situation, working with stakeholders to discuss the issues and elicit various viewpoints, and provide reasoned, appropriate counsel and recommendations. He has a strong understanding and command of business-to-business marketing issues. Always ready to help, Skip also always follows through. Every time.

Skip is a true forward thinker who is focused on creating the best brand experience for any company’s customers. Dedicated to his clients and work, Skip takes every project with the end goal in mind, increasing their ROI. A true marketing genius!

Skip Carney is energetic, passionate, smart, fun and efficient. He’s a big thinker and great implementer with his clients’ bottom line and best interest in mind every step of the way. Skip’s dedication and experience make him a leader that is known for providing marketing communication plans that measurably improve client ROI.

If you ever need a great idea, call Skip, I guarantee he’ll have one. Skip is a genius at creative marketing and business strategy and executing that strategy to move business’ forward.  He is passionate and focused about his work and life and his positive energy and sense of humor are nothing less than contagious. 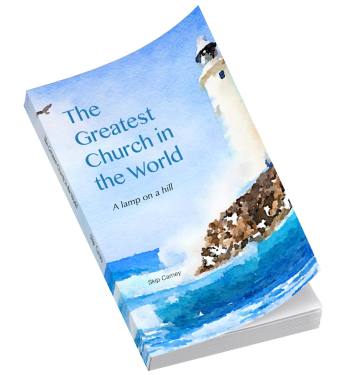 Get a FREE ChapterThe Greatest Church in the World

You will receive an email with a link to download your free chapter.